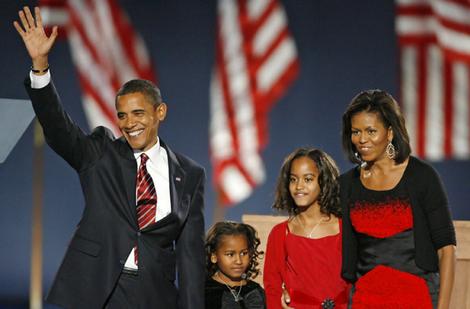 Tweet
Share
Pin
Share
Share
“If there is anyone out there who still doubts that America is a place where all things are possible, who still wonders if the dream of our founders is alive in our time, who still questions the power of our democracy, tonight is your answer.” – President-elect Barack Obama
It’s been six days since Barack Obama won the Presidency and it’s taken me this long to get my head on straight. I’ll be the first to admit that my world has been knocked off its axis in the best way possible and damn it if I scarcely know who I am anymore. Shock and awe are the only words I have to describe my feelings about this stunning success, his and ours.

It’s the strangest thing, I don’t know a single person who actually thought, truly believed, that we’d see a black man elected President of the United States in our lifetime. And I’m a young woman. My friends are young. And so are their friends. Even the most die hard Obama supporters were completely prepared for our Charlie Brown moment when Lucy would wait until the last moment to pull the football away and we’d wind up on our backs, looking up at the sky and wondering what the hell just happened. At the very least, we just knew it would be a tooth and nail battle to the end, our army of attorneys waiting in the wings to challenge some lame ass Republican antic or another.
Then, CNN projects a winner at 11:22 pm. What?! I had to read the caption four times before my heart registered what my eyes were seeing. And it wasn’t a squeaker either. Obama trounces McCain, as the NY Post gleefully reported and in that moment, the world was a brand new place.
Well, now what?
I don’t really know. And I’m sure I’m not the only one who’s been struggling to process the enormity and significance of this huge win but what I do know, is that the bar has been raised. Really high. And I can’t help but question just what the hell I’ve been doing with my life. OK, in all fairness, I’m not a complete slacker or really a slacker at all. I’m out there, making noise, pursuing the dream, doing the damned thing but I had to ask myself: “Really? Are you really doing it?” Then I realized, it’s less about what I’m doing and more about how I’m doing it. Am I really living the ‘balls to the wall’ large life I dream for myself in the grandest way possible or am I playing it safe, going through the motions, protecting myself from what I perceive to be inevitable disappointment? Turns out that I am indeed guilty of living beneath my capability.
A few weeks ago I received a message from my higher self that called for greater courage, a broader vision, innovation and creativity. A tall order indeed but nothing I can’t handle right? I mean, I’m smart, capable, creative, tenacious–so what’s the trouble bubble? Trouble is my ambition had run headlong into the brick walls of rejection so many times that I’d been slowly downgrading my dreams because I got tired of peeling myself off those walls and I simply contented myself with occupying less space.
Well bump that! Thanks to Mr. Obama and his vision for himself and our nation, millions of us are reminded that anything is indeed possible. Five years ago, no one outside of Illinois knew what a Barack Obama was. At the Democratic National Convention in 2004, before he made his now legendary speech, people wearing Obama stickers and buttons were mistakenly thought to be supporters of the state of Alabama. Today he is President-elect and on January 20, 2009 he will be sworn in as the 44th President of these here United States.
Where will you be in five years?
As for me, I am re-examining, re-evaluating, re-jiggering, giving myself some time to reinvent and then we shall see….
In the immortal words of Ms. Nina Simone: “Birds flying high, you know how I feel…it’s a new dawn, it’s a new day, it’s a new life for me, and I’m feeling good.”
RELATED POSTS
Obama Ashe
Hail to the Chief